The three criteria of a work of art: harmony, intensity, continuity. 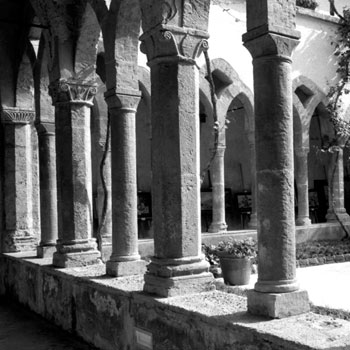 We are in the section of the exhibition dedicated to the cultural heritage that integrates with that of the landscape, in a concept not to be meant in a static ideographic way, but dynamic and changeable, and to whose enhancement everyone (chacun would say the French ) is called to contribute.

Thus the material and objective heritage acquires an extraordinary dimension of “subjective fact”. In fact that landscape, that cloister, that museum are not only the treasure of a place, the casket of the Beauty that it encloses, but also the product of sensitivity, of cultural experience, the human perception towards the space in which those wonders are located.

The use of art literature to tell about cultural places (just as it happened in the distant – near eighteenth century ) represents through this cultural digitization project a privileged tool for the elaboration and structuring of innovative landscape – cultural itineraries.

The Grand Tour project tells about a valuable heritage to attain from, for experiencing ancient suggestions, alternatives to mass tourism and capable of guiding models and behaviours of sustainable tourism, interested in safeguarding the artistic environment and the cultural milieu.

In the aftermath of a terrible pandemic that marked the abrupt end of what were hunger and the bulimic spread of “comfort goods”, the cultural syntax becomes the fundamental construct for articulating a new language of wellbeing and proposals connected to a journey into wellbeing.

The discovery of the intrinsic motivations of a place through the photography of an international master of image and literature means to emphasize the importance and the general interest of this project – by its nature continuously in progress – dedicated to the “Grand Tour”, that manages to include in the category of the “emotions” concrete concepts such as those of identity, proposal , possibility of a new cultural economy of the territory, in which culture is placed under the lens of economy and economy is celebrated at the service of the culture, as its function and its irreplaceable “hidden treasure”.

You can find out more about which cookies we are using or switch them off in settings.

This website uses cookies so that we can provide you with the best user experience possible. Cookie information is stored in your browser and performs functions such as recognising you when you return to our website and helping our team to understand which sections of the website you find most interesting and useful.

Strictly Necessary Cookie should be enabled at all times so that we can save your preferences for cookie settings.

If you disable this cookie, we will not be able to save your preferences. This means that every time you visit this website you will need to enable or disable cookies again.